This is too many words, I would like to leave

♪ What is TikTok and why should brands care?

So, how does one TikTok?

For those of you who don’t already know, or use TikTok – you may be wondering why you or your company’s brand should care about it, I mean you’re already on or tried Facebook, Instagram and Twitter – why bother adding another?

Let’s start with the basics – TikTok is a social video app that allows users to share short videos. So far so normal. The app features stickers, filters and augmented reality.

What you might not know – is that it was the world’s fourth most downloaded app in 2018 beating Instagram and Snapchat. Yes, you read that right… in 2018!

Many people expected, like Twine before it, that it would rise in popularity and then just fade away into oblivion as the next social fad kicked in. However, from a solid start – in 2019, TikTok grew to the second most-downloaded app globally, after Facebook’s What’s App, and in January 2020 its total downloads were estimated to be around 1.65bn.

You read that right… an estimated 1.65 billion downloads – can you really afford to ignore that many people?

The demographics are interesting too, ~63% of their users are under 30 years of age: 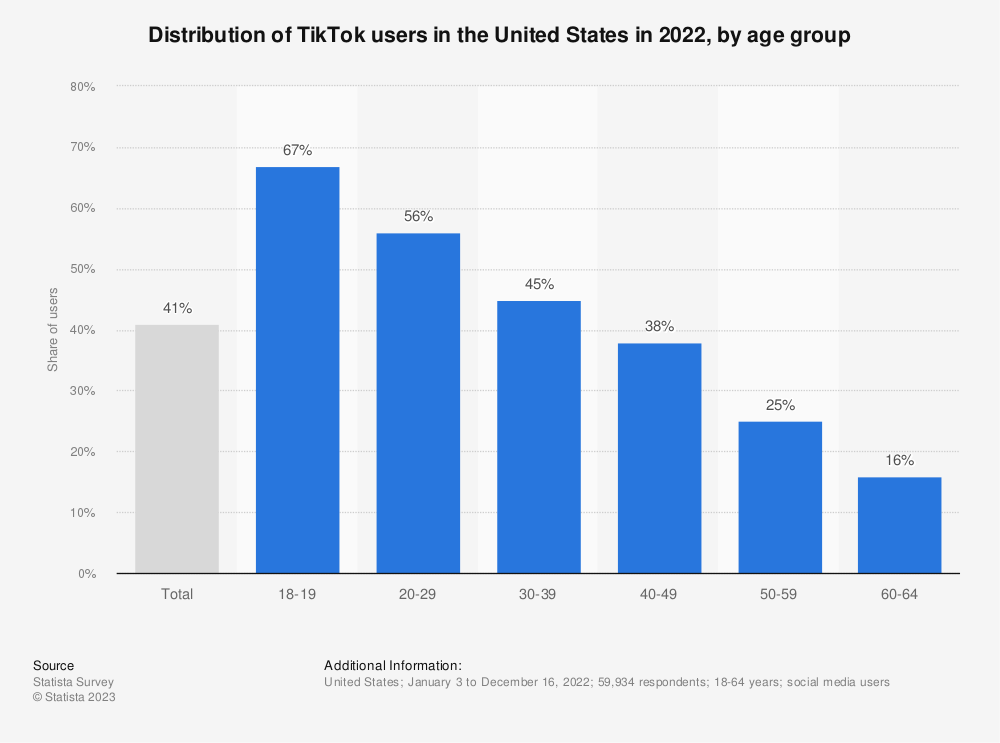 See the whole chart at Statista

Ok, so the TikTok platform has a big user base and is popular, so what? How can this help my brand?

The Washington Post has hired a TikTok app expert. Buzzfeed is recruiting teens to cover the election on TikTok. A who’s-who of celebrities have opened accounts. And ads finally made their way onto the platform, along with a shoppable component.

Before just downloading the app and just jumping in like a fool, businesses need to focus on creating stories that entertain and engage with people rather than just self-promoting. People hate ads – that’s why it’s important to use humour and create simple, funny and creative stories that win you followers. There are a few tricks you can use to take the plunge.

Yep, you guessed it… Influencers

Like you probably already know, Influencers play a key role on social media. They can launch your brand way beyond what your traditional PPC or SEO spend might return for you.

TikTok’s user base is one of the most engaged ones, data suggests that an average session duration for a TikToker is almost double that of Instagram. It has been shown that TikTok’s engagement rate is almost 5x higher than Instagram’s for accounts with over 100,000 followers.

TikTok has also introduced a beta version of Creators Marketplace platform, where brands can filter creators they want to work with based on goals and see an array of data about those particular influencers, including average views per post, likes, comments, and shares.

Not interested in Influencer marketing?… ok how about straight-forward advertising?

TikTok is all about short viral content, choreography to a popular song, a viral challenge or just captivating content. It’s video content, so whilst it requires more effort than just recirculating brand assets like banners and image posts – as previously stated, that effort is rewarded with higher engagement from the audience.

The formats allowed on TikTok include:

But if you are a bit more creative, then there are also:

So, the million dollar question… does it actually work?

Spikeball describe themselves as if volleyball and foursquare had a baby. It’s an incredibly fun game. They started just a few months ago and already have 30,000 followers, over 1 million likes, and over 10 million views

Gymshark have embraced TikTok and have amounted over 1.2 million fans and have been posting consistent, quality videos. They post a good combination of workout videos, workout memes, and inspiration.

Chipotle’s Halloween $4 burrito deal promoted by influencers, as well as hashtag challenge contest where the 5 most liked videos won free Chipotle for a year. And another good example from Chipotle was the #ChipotleLidFlip challenge to spread the word about free delivery for Cinco de Mayo.

📞  For ideas for how you could use TikTok, please schedule a call with Sam to discuss.

It’s been a tough few months but we’re finally allowed to have some drinks with some mates outside! Yay! We […]

Week ? of lockdown and it’s only getting longer. Let’s cheer you up with some beautiful design work we’ve spotted […]